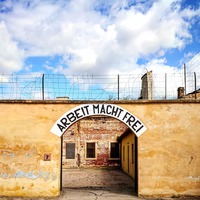 Description of the tour: Originally built as a fortress city in 1780 by Josef II and named poetically by his mother (Maria Theresa) Teresienstadt. During the WWII was the Main Fortress used as a Jewish ghetto for Jews from former Czechoslovakia, Austria but also from Germany, Netherlands & Denmark. Part of the fortification (Small Fortress) served as the largest Gestapo prison in the Protectorate of Bohemia and Moravia - this was on the other side of the river from the Main Fortress and operated separately...

During the tour we will visit the complex of Small fortress (Gestapo prison), Museum of Ghetto, The Magdeburg barracks, Columbarium, Ceremonial Halls and Central Morgue & The Crematorium at the Jewish Cemetery.

Lenght: Depending on the interest of the clients. Usually it takes 7 hours. But because it is a private tour, this can be done according to the will of clients.

Including: Guide in English & Private car with a driver

Led by: Katrin or Petr

We use cookies to enable the proper functioning and security of our website, and to offer you the best possible user experience.